There were five World War I campaign medals in all

('Pip', 'Squeak', and 'Wilfred' were popular cartoon characters in the Daily Mail.  (In the cartoons, by A B Payne, Pip was a dog, Squeak a penguin and Wilfred a young rabbit.)

The first two medals have been written about in this blog

The medals were awarded to officers and men of the British and Imperial Forces who were in service between 5th August 1914 and 11th November 1918, who served either in a theatre of war or served overseas, but to receive it the person must have left British shores.

The front showed the head of George V, and the recipient's service number, rank, name and unit were on the rim.  On the reverse is an image of St George.  The ribbon has a central band of golden yellow with three stripes of white, black and blue on both sides. The soldier's regiment and number were inscribed round the rim. 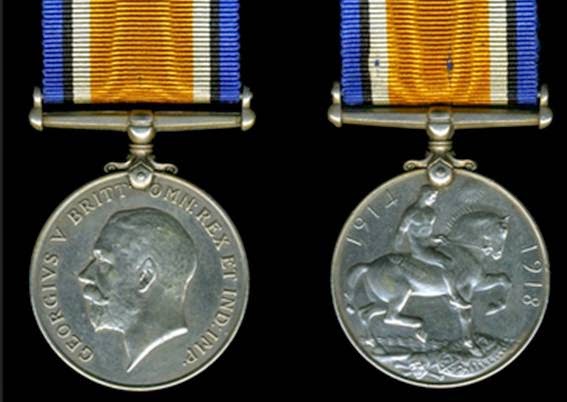 The Victory Medal was issued by each of the victorious Allied countries and the British medal was designed by William McMillan (who, incidentally, died in 1977).  On the front was a Winged Victory in a classical pose and on the reverse was the inscription 'The Great War for Civilisation'.  The medal was in bronze.

The medal was only awarded to all those entered a theatre of war, (unlike the British War Medal, which was given to men who served overseas - which included Indian Service), so it was awarded to 300,000 fewer men, with a total awarded of 5,725,000.  The medal was also awarded to men who fought in Russia and Trans-Caspia

All three services were eligible, including women for their service in nursing homes and auxiliary forces.  It was also awarded to the British naval mission to Russia (1919-1920) and for mine clearance in the North Sea between 11 November 1918 and 30 November 1919. 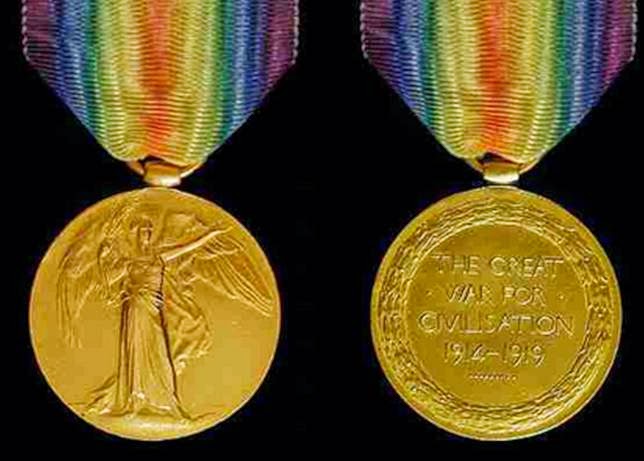 Online Records for the British War Medal and the Victory Medal

There are over 5 million cards, most of which are for soldiers in the British Army.  The collection includes:


The Medal Index is also available Ancestry under the title


For a list of all medals on Ancestry and Findmypast go to
http://www.familyhistoryrecordsonline.com/military.html#medalsandhonours
Posted by Family History Records Online at 9:21 AM