Family Tree magazine Christmas edition, which is in addition to the December edition, has a feature on the YMCA during the Great War by Amanda Randall. Although not the lead article, which is about telling your family story, it is very topical given the heightened interest in the First World War.

The YMCA stands for 'Young Men's Christian Association' and was founded in 1841 by George Williams who was a Somerset draper. By his death in 1905 the YMCA had expanded across the globe, operating in 45 countries and with more than 700,000 members. However, it was only in 1912 that the first purpose-built hostels were opened in London and Cardiff.

On the outbreak of the First World War the YMCA reacted with impressive speed. Within 10 days of the start of the war the organisation had set up centres in 250 locations, with tea and sandwiches at travel points and hut in army camps. The YMCA were also active along the front lines and there were hundreds of YMCA huts, dugouts and buildings, as well as hospitals and schools along the key stretches of the Flanders front lines. There was also music, films and morale raising shows to lighten the otherwise grim existence of the troops.

One of the best, and most evocative sources for YMCA's work in the First World War is the YMCA giftbook 'Told in the Huts' which was produced in 1916 and is available at Archive.org
https://archive.org/details/toldinhutsymcagi00londiala. 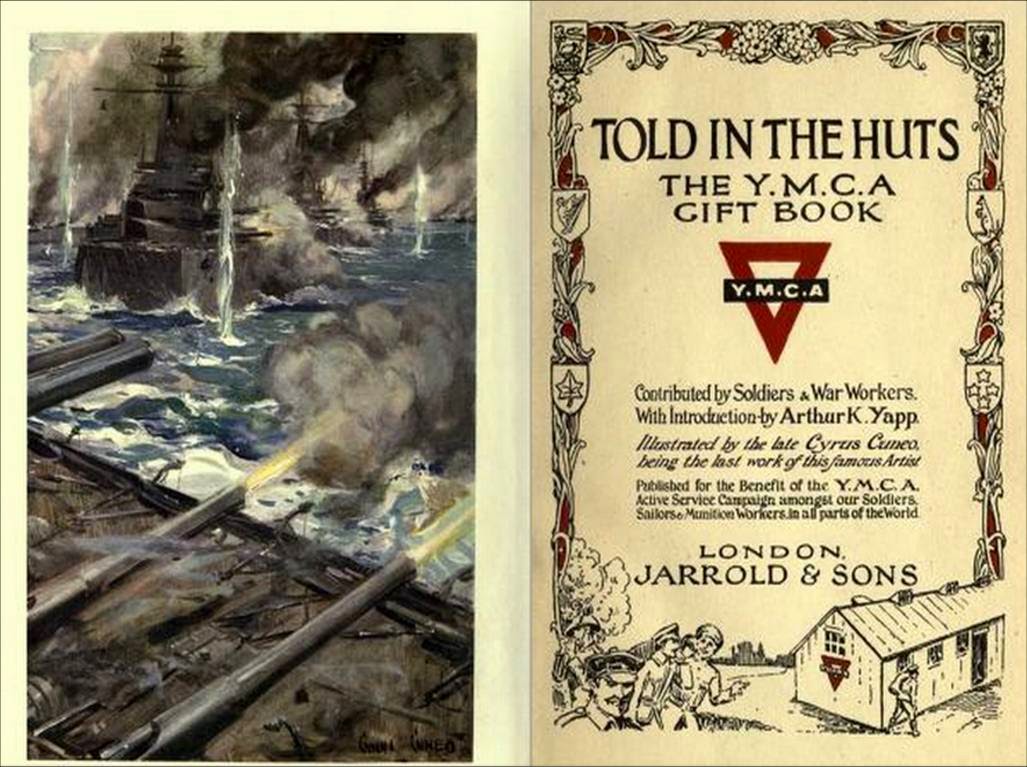 It is mainly a collection of stories and accounts but vividly captures the soldier's life on the front line. Articles and stories include

Interestingly it states on the title page that the volume contains the 'last work of the famous artist' Cyrus Cuneo.

The single greatest online collection of references for the YMCA's work during the First World War in Britain is that of the newspapers, and the British Newspaper Archive (which is also on Findmypast) contains over 28,000 references for between 1914-1918. There is a potential wealth of information in these often brief mentions, such as this one regarding a YMCA hut fire on Salisbury Plain, as reported in the Newcastle Journal on the 10 January 1916.

Unfortunately, given the interest in the First World War and the role of the YMCA, there are not a lot of other records online, though there are a number of references to published works and archive. The main archive is at Birmingham University and the collection spans the dates 1838-2008 and covers 55 metres of shelving. A PDF helpfully lists the collection

Amanda Randall's Family Tree article mentions some other online information which give accounts of work at the YMCA. Most of the online records relate to the American experience (see below) but there is a typewritten page of Ernest William Hornung's diary. Ernest volunteered for the YMCA after his own son was killed in the Trenches. The page is at (http://www.flickr.com/photos/cadburyresearchlibrary/14481904818/in/set-72157645723117675/).

The diary entry gives his initial impression of his first days with the YMCA in France. One point of note is his description of his 'first evening's work' for the YMCA which he describes as 'enchanting'. Hardly a word used often about the First World War. 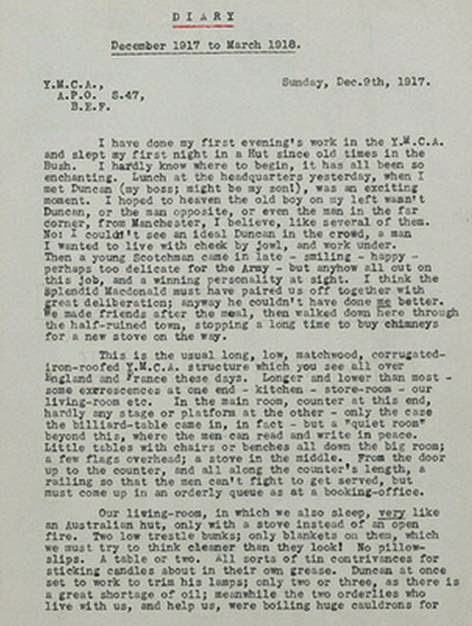 There are a few photograph collections online: Flickr has a range of WWI YMCA images as part of the Cadbury collection at
http://www.flickr.com/photos/cadburyresearchlibrary/14666227874/in/set-72157645723117675/ and the Imperial War Museum also has a small online collection of YMCA photos at http://www.iwm.org.uk/search/global?query=YMCA&x=-946&y=-28

There was also the YWCA (the Young Women's Christian Association) which was founded in 1855 in London by two Englishwomen to provide a safe place for young women en route to the Crimean War. It held its first international conference in London in 1898. Unfortunately there seems to be almost nothing online about their British WWI work.

Bringing the story up to date, there is a fun and educational project in Bradford called 'Tea and Remembrance' which has rebuilt a YMCA Tea Hut http://teahut-ymca.org.uk/.
As their website states

'The YMCA was the largest non-military organisation involved in the War effort, providing shelter and home comforts from the home front to the front line.  The aim of the Tea Hut, part of our Tea and Remembrance project, is to raise awareness and commemorate this great history.' 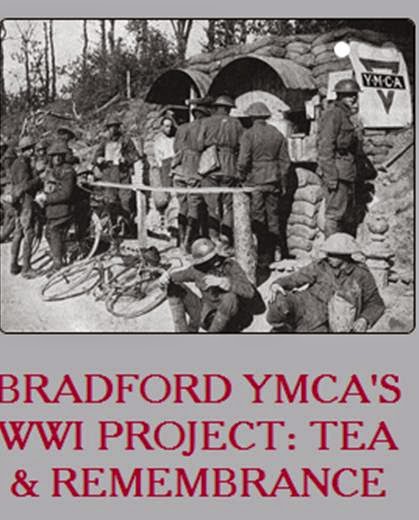 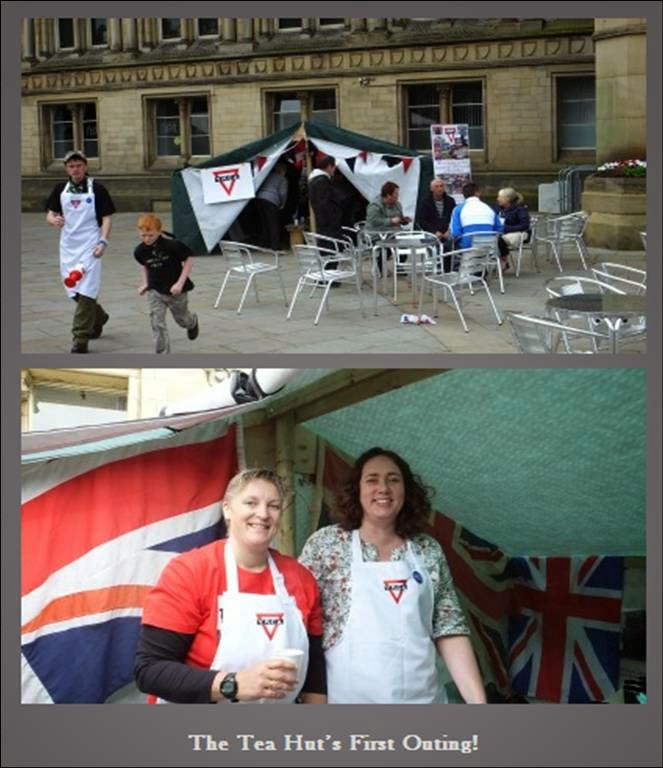 I think this is an excellent merging of historical remembrance and (gentle) modern social action.

She was in a concert party and has a humourous eye for detail, but despite some privations, cultural differences and missing the US, she seems to have an enjoyable time. 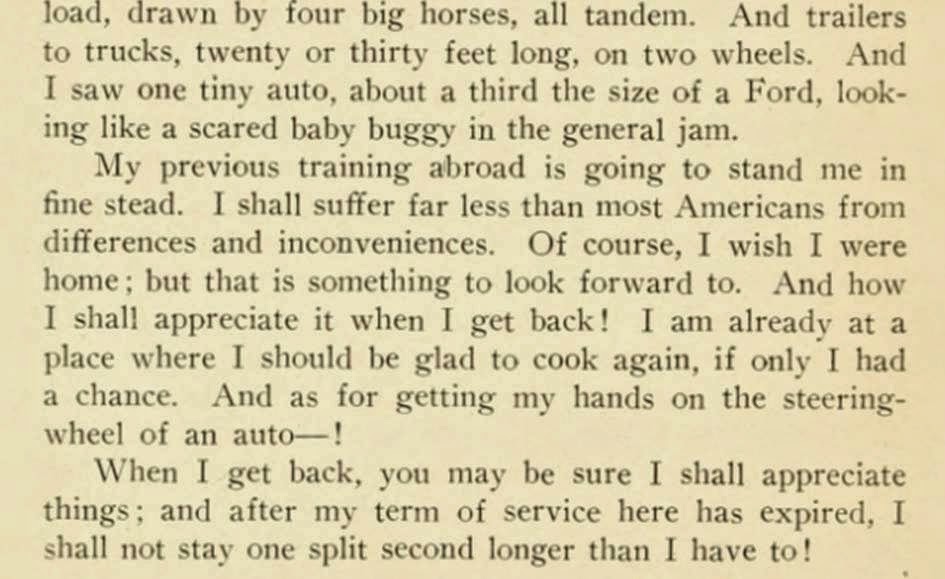 The webpage 'Doughboy Centre' gives a history of the YMCA as it relates to the American Expeditionary Forces (http://www.worldwar1.com/dbc/ymca.htm). There are a series of the 'Dots and Dashes' YMCA magazine from a New Jersey branch during the First World War on Archive.org, one for 1918 is at https://archive.org/details/19180710Vol2No3DotsAndDashes. There is also a page of American WWI posters at https://www.pinterest.com/michelleule/ymca-wwi/.

The American branch of the YWMA has a page about it's history relating to World War I, World War II and Defence Services at http://asteria.fivecolleges.edu/findaids/sophiasmith/mnsss292rg6s7_scope.html#subseriesa

The Family Tree article, titled 'A little bit of home' (pages 26-29) is an excellent short introduction to the subject and has the following sections

Of course - if you know of any more online records then do let me know at familyhistoryrecordsonline@gmail.com

Posted by Family History Records Online at 8:21 AM